Will We See Another Woman Play in a Men’s Professional League Ever Again? 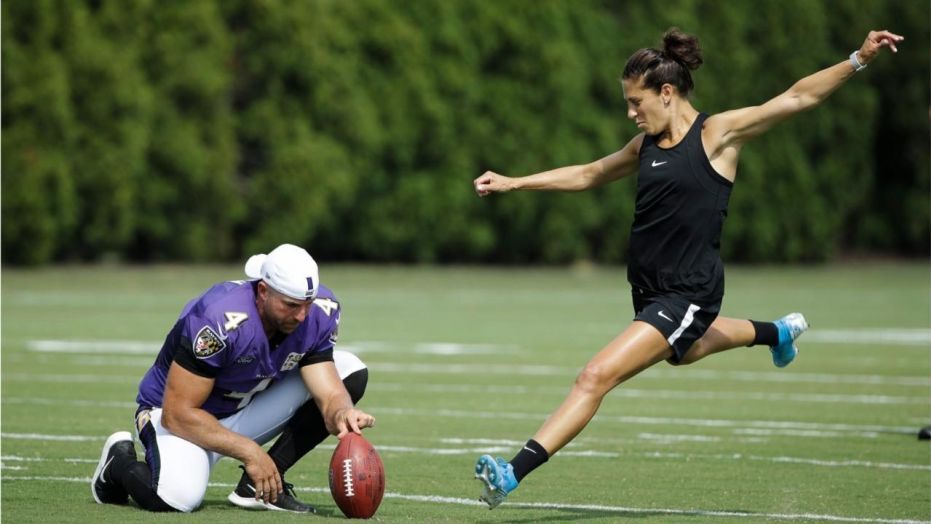 Both Carli Lloyd and Julie Ertz have stopped by the Philadelphia Eagles training camp this month. Julie, who is a two-time World Cup champion and the wife of Tight End Zach Ertz and Carli, an avid Eagles fan who screamed #FlyEaglesFly at the ticker tape parade celebrating the Women’s World Cup Championship, enjoyed time spent looking on as the Eagles prepped for their 2019 season.

Both women have been part of the women’s national team’s victory tour around the United States. They will actually be at Lincoln Financial Field next Thursday, August 29th. It is on pace to be the most tickets sold a standalone U.S. women’s team friendly.

On Tuesday, a video surfaced (who am I kidding, it was posted everywhere, including by the Eagles) of Carli attempting two FG kicks – her longest being 55 yards.

Add in the “double-doink” that knocked the Chicago Bears out of the NFL Playoffs last year and their offseason kicking circus. Well that got people talking and “joking” about the Bears should sign Carli Lloyd.

Their talking got me thinking.

Why couldn’t a woman be a place kicker in the NFL?

Or more… why aren’t there more women in the predominantly male-driven professional sports?

Woman in the NHL

Back in the early 1990s, just after the Tampa Bay Lightning came into existence, goalie Manon Rheaume played an exhibition game for them. She was an Olympic silver medalist, so she was no “Jane Doe” off the street and putting on the pads.

Evelyn “Lady” Byng has an annual award named after her given to the NHL player exhibiting the greatest sportsmanship during the season.

Marguerite Norris, the first woman to have her name inscribed on the Stanley Cup, and Irene Castle, who designed the Chicago Blackhawks logo, have both been part of the ownership or executive side of things, but never played. Outside of Castle, there are seven women’s names on the Cup.

Most recently, Kendall Coyne Schofield got to join the men in the NHL Skills Competition, which takes place on All-Star Weekend. Schofield is a U.S. gold medalist in the 2018 Winter Olympics, was part of the fastest skater competition. While she might’ve been a fill-in for Colorado Avalanche center Nathan MacKinnon, it was a huge step to get her on a grand stage.

While there hasn’t been a female NHL player since Rheaume, I could see Schofield starting a trend that gets more women involved in the NHL on a playing level.

I don’t know about you, but I love watching the Winter Olympics. Especially hockey – both men’s and women’s.

Women can play hockey. There is no doubt about it. They’re just as physical, can stick-handle, and can play the game just as good as, if not better, than the men.

So why hasn’t there been a woman on an NHL roster? Don’t give me the “but roster spots are limited” because if she was talented enough, she’d help.

Women in the NBA? Let’s just make a women’s league

There has never been a woman who played in the NBA, but in 1996, the NBA approved the Women’s National Basketball Association aka WNBA. They haven’t had the same success as its male counterparts, with teams folding or moving due to financials, or the athletes actually being forced to play in other countries outside of the WNBA season due to the pay they actually get during the WNBA season.

Back in April of this year, Breanna Stewart, who plays for the Seattle Storm, tore her Achille’s tendon while playing for her Russian team. If 1. the WNBA paid their players better and 2. the NBA signed women to play in their league, would that injury ever have happened?

This isn’t the 1920s through the 1950s or 1960s when the male players had jobs in the offseason because they needed to support their families.

The women are playing the same NBA game (for the most part) that the men are playing. Why are they forced to get the second job or second career in another country because their league doesn’t want to pay.

That famous line is from The Sandlot, which was used as a dig towards women.

There has never been a woman in the MLB. But who says their can’t be?

Hell, if you’ve seen the movie A League of their Own, you know there was a PROFESSIONAL (!!!) girls baseball league.

It wasn’t something made for Hollywood.

There are girls who even play in the Little League World Series, most notably Mo’ne Davis, who played for Taney Little League, who represented the MidAtlantic Region in 2014.

She was an insanely talented pitcher then and an even more talented athlete now.

I admit that baseball and softball, while related, are pretty different.

Baseball fields are bigger in every dimension.

The NBA and NFL have officials that are women.

The NBA and NFL also are having coaches that are women, albeit assistant coaches. Maybe one day they’ll be head coaches.

This is becoming the norm as each year, as each league keeps adding more and more female coaches and teams hire assistants. If they can add to the team, it shouldn’t matter their sex or gender.

I found out, via there used to be a female umpire and hockey ref, but there hasn’t been one in years.

Hey, It Could Happen

The NFL has never had a woman make a team.

That might change in a couple years, as Toni Harris signed a letter-of-intent to play at Central Methodist University in Missouri. She is 22 and her goal is to make the NFL. Even if she doesn’t make it, with her proving she can play, it will open the doors for other girls who want to play.

There was a try-out that never panned out. In 2013, Lauren Silberman was one of 38 kickers to try out at at New York / New Jersey combine at the New York Jets facility.

From the article in USA Today by Mike Garofolo,

Silberman kicked only twice, kickoffs for a total of 30 yards. Only one crossed the midfield stripe – by a yard. After that, her day was over because she said she aggravated a quad injury she suffered in practice last week.

“Her performance does not have to do with her gender, it has to do with her experience and her preparation,” Hnida, a former college kicker for Colorado and New Mexico and the first woman to score a point in a Division I game, told USA TODAY Sports by phone. “Unfortunately, what’s going to happen now is she’s going to be looked at (as inferior) because she was female.
“But she was terrible.”

What Hnida didn’t see was the 20-second period before the kick in which Silberman couldn’t figure out how to stand the ball on the tee without it falling. Hnida fell silent on the other end of the phone when told that.
Hnida, who is battling back from a blood clot that put her Arena League career on hold, also didn’t see the awkward nine steps backward and five steps sideways Silberman made as she lined up 6 yards behind the ball instead of the standard approach from 10 or more yards.

Three kickers who tried out along with Silberman on Sunday said the former MIT student asked a few of them how to approach the ball on the kick. The kickers spoke to USA TODAY Sports on condition of anonymity because they didn’t want to hurt their chances of getting another tryout with a team.

Has it hurt women’s chances? I don’t know. That was 6 years ago and a lot has changed in our country since then.

Who says a woman can’t play in a professional “men’s” league? Is it written in their CBA? Doubt it.

Think of all the discussions happening now with kids about what football can lead to. It’s up to the parent / child to agree to participating, knowing the risks.

Why can’t the same discussion happen with women and the professional leagues? There are so many positives that can come out of it.

The manly thing to say is “it’s never been done this way” or “what if they break a nail.”

It’s been done before. It should be done again.

If someone is talented enough, they should be given the opportunity to showcase their talents.

← Use Your Imagination
Troy Aikman is Right. Who Are We To Judge. →